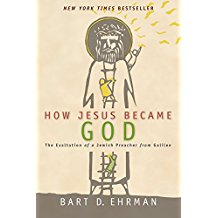 How Jesus Became God : the Exaltation of a Jewish Preacher from Galilee, by Bart D. Ehrman