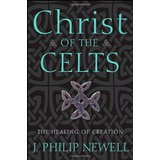 Christ of the Celts: The Healing of Creation; by J. Philip Newell