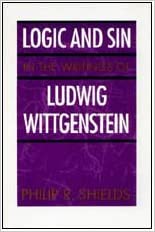 Logic and Sin in the Writings of Ludwig Wittgenstein, by Philip Shields