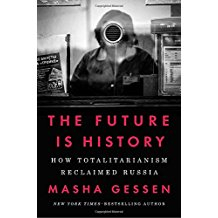 The Future Is History: How Totalitarianism Reclaimed Russia, by Masha Gessen