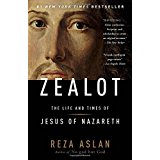 Zealot: The Life and Times of Jesus of Nazareth, by Reza Aslan